Beach huts are available to hire (including the ones featured in Broadchurch) and many families come to collect the famous Charmouth Fossils.

Charmouth beach is divided into two by the mouth of the River Char which is often dammed by the beach forming a lagoon suitable for boating or watching the many ducks and swans. To get to the beach simply find the centre of the village and follow Lower Sea Lane. There are ample car parks (no coaches) close to the beach but if they are full there is also a car park half way down Lower Sea Lane.

The Charmouth Heritage Coast Centre should be your first stop if you want to go fossil hunting. The Centre has lots of displays that can help you discover how to find your very own fossils to take home. They also run Guided Fossil Walks throughout the year. Charmouth and Lyme Regis fossils are famous throughout the world, and many international visitors come to the area specifically to see the fossils. 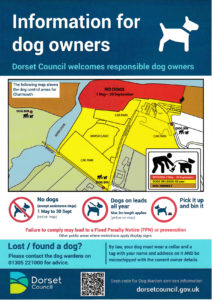 The following restrictions apply to dogs using the beaches and foreshore areas. Click the map (right) to enlarge.

West beach (beyond the promenade) – Dogs are allowed at any time but please pick up their litter and put it in a dog bin.

East beach (east of the river) – Dogs are allowed at any time but please pick up their litter and put it in a dog bin.

Dogs are NOT allowed at any time between 1st May and 30th Sept on the central area of beach between the river Char and the western end of the promenade. This is the red area in front of the blue beach huts, the sea front car park, the café/Heritage Coast Centre, and the raised promenade (the yellow area on the map).

Please always pick up after your dog, whether on the beach, fields, car parks or pavements.

There are a number of Shops where you can purchase beach goods and food and drink. Shops in the village centre and at the beach can provide you with sun cream, hats, sun glasses, bags, beach shoes and many other items. Take away or eat in refreshments are available from the shops and the local cafés and restaurants. 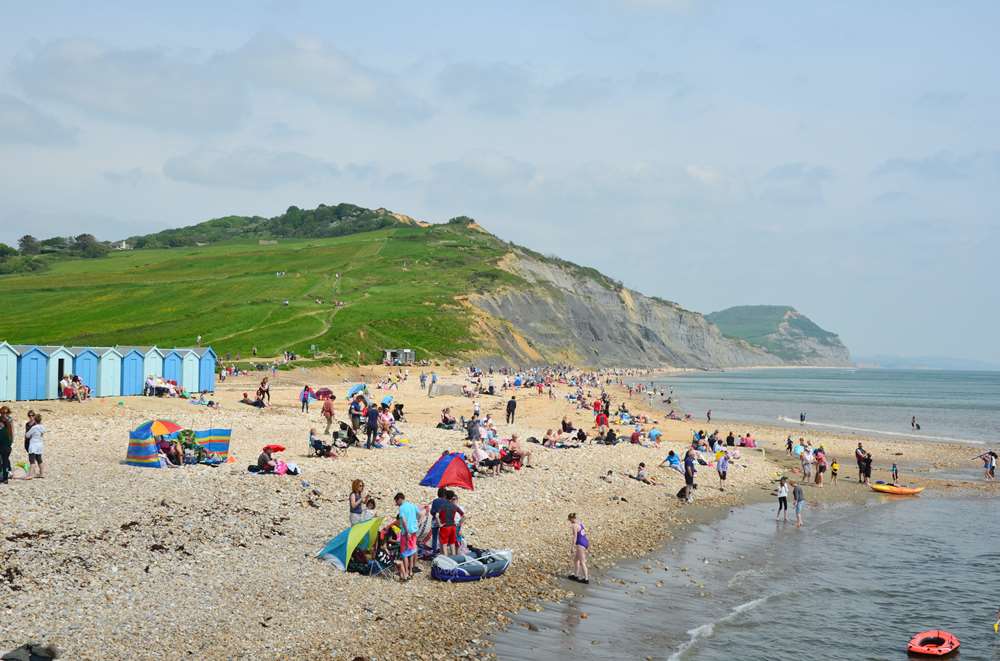 The beach to the east (the left as you face the sea) is often the preferred choice of families and sun bathers because the pebbles are smaller and there’s more dry sand. Access to the beach is either over a foot bridge or by wading through the river at low tide but watch out for the current which can be strong.

There is a beach café above the high tide line selling hot and cold drinks, snacks and useful things for the beach. There is also a level grassed area adjoining the beach.

At low tide the wet sand stretches for several hundred metres providing an easy, level surface for strolling and admiring the towering cliffs at the base of Stonebarrow Hill and the impressive mass of Golden Cap, the highest point on the south coast, about a mile away. 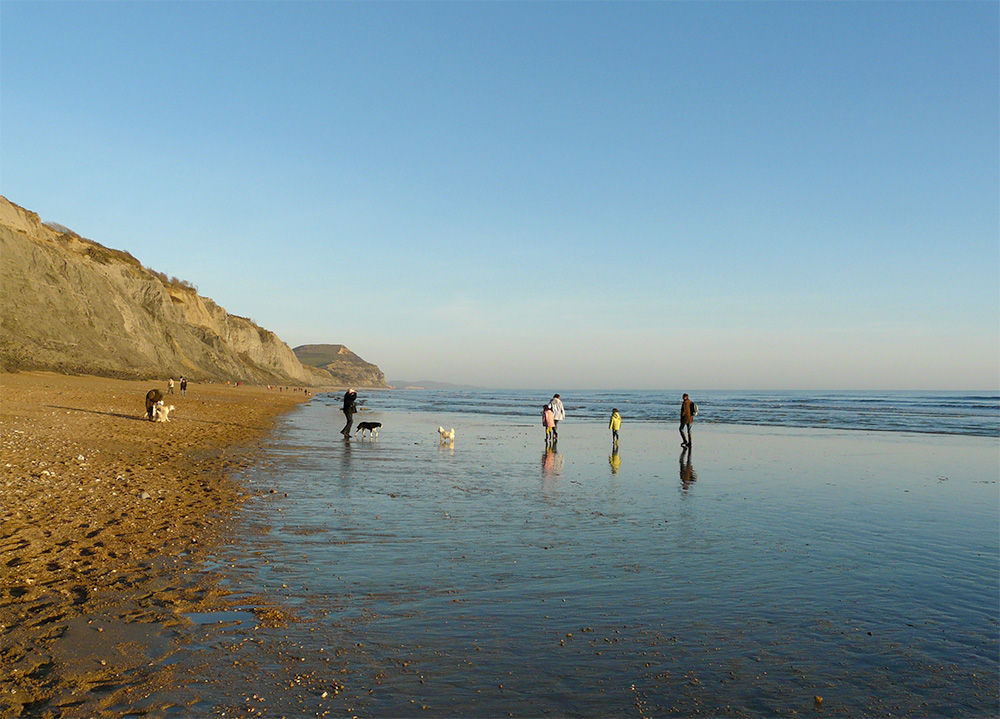 At high tide most of the east beach is impassable as recent mud slips often bar the way. Although they may look dry, avoid clambering over the slips as the ‘crust’ can be very thin and the slips are virtually liquid inside. Many people have got stuck in the mud, requiring the assistance of the coastguards.

The East beach is a good place to find pyrite ammonite and also belemnite fossils loose amongst the pebbles. You don’t need to break rocks, the fossils can be found on the water line.

It is important to remember that the soft cliffs are always on the move, not just in wet weather. You are strongly advised to keep a safe distance away because there are frequent falls from the cliff top, often involving tonnes of debris. Hammering at the cliff is NOT permitted because the beach is part of the Jurassic Coast which is England’s only Natural World Heritage Site. 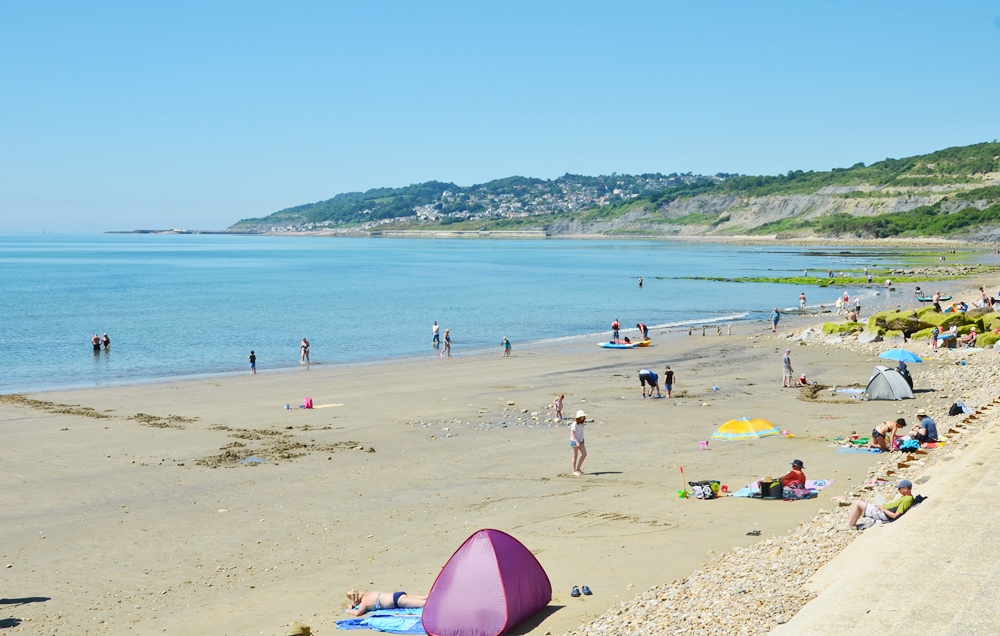 West beach stretches about a mile and a half from the mouth of the river Char to Lyme Regis along the base of Black Ven, one of the largest and most active landslides in Europe. The pebbles are larger along this stretch of the beach and it is a haven for fossiler hunters. Charmouth fossils are found on the foreshore and hammering at the cliff is NOT permitted.

The area of beach immediately in front of the Heritage Centre, Café and shops, provides a wonderful flat area sand when the tide it out, which is very popular with families. The beach shelves gently into the sea providing a good area for swimming. 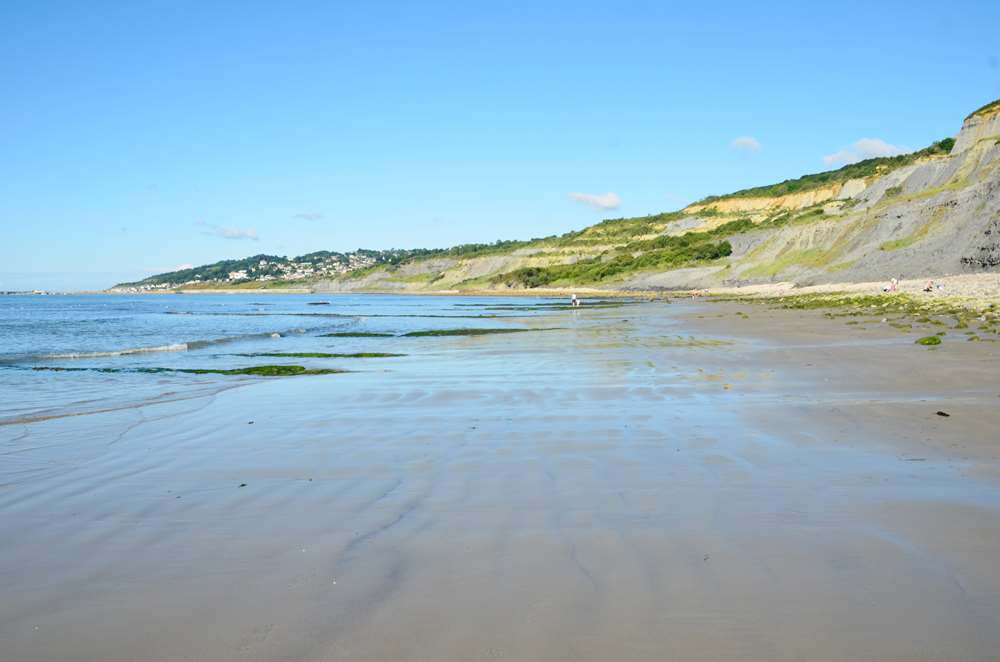 At low tide there is a large expanse of wet sand, broken up by rocky ‘ledges’ with pools. It is possible to walk all the way to Lyme Regis along the beach but only when the tide is low enough. About half way between Charmouth and Lyme Regis the landslide has covered the beach with large boulders so there is a certain amount of rock-hopping to do.  You are advised to check at the Charmouth Heritage Coast Centre if the tides are suitable to walk to Lyme Regis before setting off.

Many factual and lifestyle television programmes are recorded on the beach west of Charmouth where the local experts explain the significance of the Charmouth and Lyme Regis Fossils.