Ichthyosaurs are a type of extinct marine reptile which had streamlined bodies. On appearance they resemble sharks and dolphins but these creatures are not directly related to each other. They look similar because they are all adapted to being fast swimming predators who have streamlined bodies. Ichthyosaurs were so well adapted for life in the sea that they gave birth to live young. The largest ichthyosaurs found around Charmouth are around 10 metres long.

Victorian fossil hunting pioneer Mary Anning discovered the first ichthyosaur skeleton on the beach between Charmouth and Lyme Regis when she was just 12 years old. 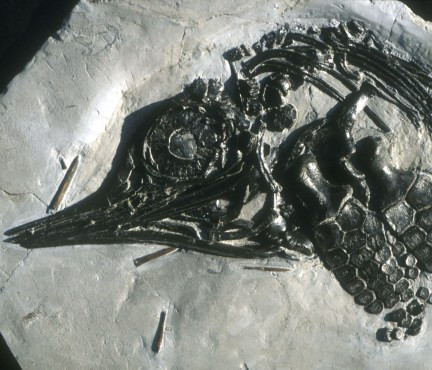 This is a new species of ichthyosaur that was discovered here in 1995 by Chris Moore. Experts use features of the skull and paddles to identify these Jurassic Reptiles. This specimen is now kept at The Natural History Museum in London.