< Back to the Lyme Bay album
Latin name – Eunicella verrucosa
Size – usually up to 25cm, can be up to 50cm
Habitat – attached to rock, usually below 15m

The Pink Sea Fan is a coral and can be found off the coast of Lyme Regis. It is a nationally protected species due to its dwindling population and is a priority species under the UK Biodiversity Action Plan, which aims to maintain the abundance and distribution of this coral. Sea fans are long-lived and slow growing and their numbers are strongly affected if they are removed or damaged by human activities. 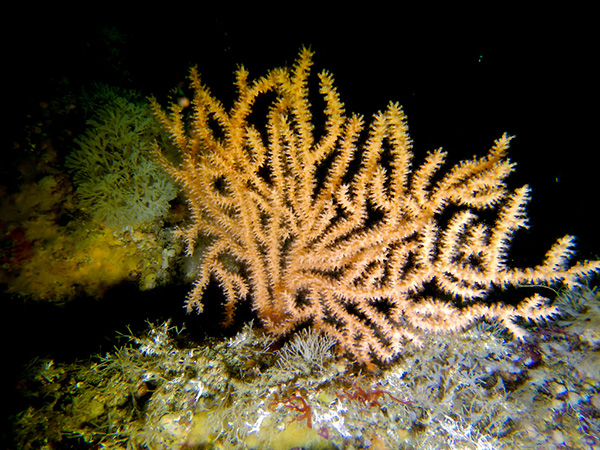 The Pink Sea Fan is a type of coral and can be found off the coast of Lyme Regis, as well as Pembrokeshire, south Devon, Cornwall and in the south west of Ireland. Sea fans are actually colonies of anemone-like animals. Although it is called the Pink Sea Fan, the colour actually varies from white to sometimes an orange-pinky colour. Photo by Stephane Bouee.