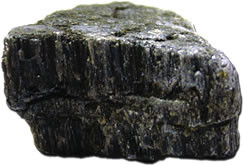 Age: Jurassic – around 195 million years old
Composition: Calcite and mud (crystal form of calcium carbonate)
Origin: From the layers of mud in the cliff

This rock gets it's name because it looks a little like a beef steak.

Beef rock forms when calcite crystals grow like fibres usually forming flat slabs in the layers of mud. The slabs are easily broken up to pebble sizes on the beach. You can see the fibres of calcite in the edges of these flat pebbles.